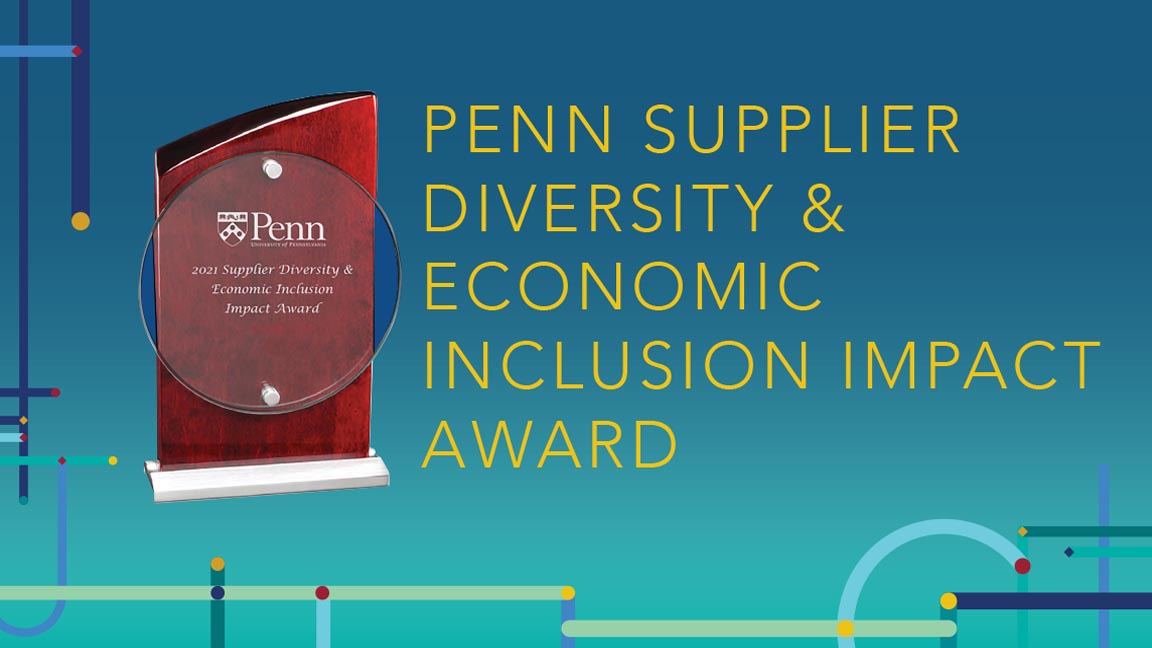 Penn Procurement Services recently announced the inaugural recipients of the Penn Supplier Diversity & Economic Inclusion Impact Awards.  Two awards were bestowed, one to a team and another to an individual, and the recipients were honored for their outstanding contributions in driving impact in the area of supplier diversity and inclusion.

The ideals behind this award recognition are vitally important to the University’s ongoing commitment to supplier diversity, according to Division of Business Services Vice President Marie Witt.  “The efforts of these award recipients demonstrate the value that can be derived when inclusion is at the forefront of decision making.  Both awards exemplify how a positive difference can be made to foster prosperity within the neighboring community and throughout Philadelphia.”

One award was granted to a team from the Office of the University Architect in Facilities and Real Estate Services.  The honorees are Ke Feng, Mark Kocent, Eva Lew, and Jackie Schlindwein. During the early weeks of the pandemic, this team recognized that custom signage would be necessary to guide the Penn community during the University’s anticipated re-occupancy of campus. The chosen supplier was a Philadelphia-based, Black-owned business, Replica Global. The business met this challenge and responded by creating a customized catalog with Penn prototypes that was consistent with Penn branding that could be used in buildings, elevators, and other areas where faculty, staff, and students would gather.

Nadine Beauharnois from Weitzman School of Design was recognized for her continual work to establish relationships with diverse and minority suppliers. Her commitment, which has been described as helpful, caring, resourceful, and happy to help no matter the task, ensures that Weitzman faculty, staff, and students utilize not only major suppliers but the local, diverse services that are not always highlighted. Her self-motivation was a major factor in Weitzman’s level of business with diverse, local suppliers, placing their School’s spend among the very highest in the University.

“Penn’s Supplier Diversity & Inclusion Program underscores how a sound strategy can help identify and increase awareness about the importance of diversity in procurement,” said Chief Procurement Officer Mark Mills.  “This year’s inaugural honorees have cultivated meaningful relationships and have moved the needle as Penn intentionally seeks out and does business with local, diverse suppliers.”

The awards were announced at the Penn Supplier Diversity Forum & Expo held on July 28.